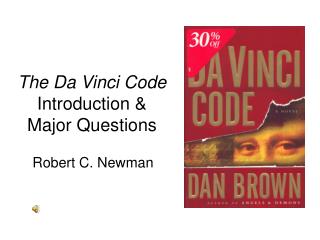 The Da Vinci Code Introduction & Major Questions Robert C. Newman What ' s the Buzz? The Da Vinci Code is a novel that has attracted an enormous amount of attention: A murder mystery Of the thriller sort Containing 454 pages in 105 short chapters A real page-turner!

Da Vinci Code Debunked - . may 15, 2006. introduction. panelists irene mariana adam ann why is there a problem; after

What was Gnosticism? Which “Gospels” Came First? - The da vinci code: gnosticism renewed (iii). what was gnosticism?

What is Gnosticism? What are the Gnostic Gospels? - . in the da vinci code

Leonardo da Vinci - . i only knew him through the art aspect and wanted to learn more about his works in science. it

Inventions of Leonardo Da Vinci war machines Multi-cannon - . the design is a multi-cannon gunship, viewed from above

&quot;Perspective is the rein and rudder of painting&quot; - Leonardo da Vinci - Perspective.

Gray Code - . in a gray code only one bit changes between each pair of successive code words. . 2bit-gray code. gray code

Mary Magdalene and the Da Vinci Code - . we are witnessing the degradation of morality and the introduction of all manner