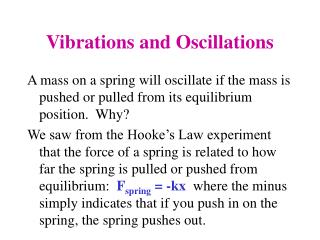 Vibrations and Oscillations A mass on a spring will oscillate if the mass is pushed or pulled from its equilibrium position. Why?

25.1 – vibrations of a pendulum - . period of oscillation only depends upon: length of pendulum acceleration of gravity

Topic 4 Oscillations and Waves - . waves. waves can transfer energy and information without a net motion of the medium

Oscillations and Simple Harmonic Motion: - . ap physics c: mechanics . oscillatory motion is repetitive back and forth