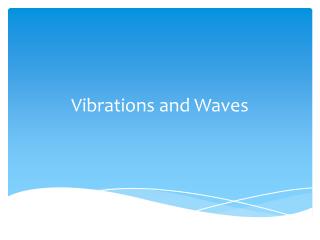 Vibrations and Waves. Prior Knowledge Questions. 1. How are waves part of your daily life? 2. What are the names of waves that you are familiar with? . Sound waves, visible light waves, radio waves, microwaves, water waves, sine waves, . telephone chord waves, stadium waves,

Vibrations and Waves - . the basis of sound and light. pendulum. back and forth motion of pendulum called simple harmonic

Vibration and Waves Review - . ch 25-26. a longitudinal wave is:. a wave where the particle oscillation is perpendicular

Vibrations &amp; Waves &amp; Sound - . ‘”a periodic motion of the particles of an elastic body or medium in