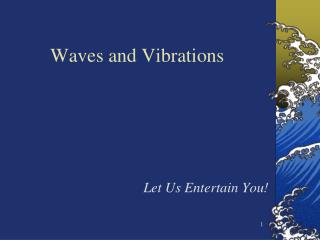 What causes sound waves? Vibrations A medium Low pitch Amplitude? - Marissa made a wave using rope. the wave had

SOUND Energy - . what is sound energy?. sound is a wave of vibrations sound travels through a material by bumping into

WAVES AND VIBRATIONS NOTES - . a wave is a vibration moving in time and space. it cannot exist in one place but must