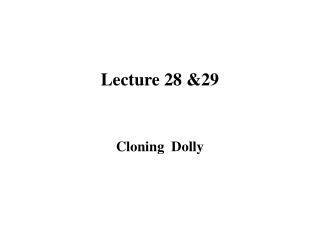 Lecture 28 &29 Cloning Dolly What was Dolly?

Cloning - . cloning. i. i. original nucleus. oocyte (unfertilized egg). “donor” nucleus. some background:. what is

Human Cloning - . by: bailey rogers. http://publications.nigms.nih.gov/insidethecell/images/ch4_twins.jpg. what is

Reproductive Cloning - . the benefits of embryonic cloning. what is reproductive cloning?. cloning is the splitting of

3 therapeutic cloning - Types of cloning. 1 recombinant dna technology or dna cloning,. the transfer of a dna fragment of

So What’s So Bad About Human Cloning? - . andrew latus jan. 22, 2003. an important distinction. therapeutic cloning vs.