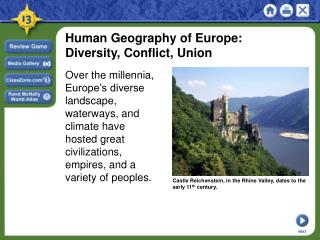 Human Geography of Europe: Diversity, Conflict, Union Over the millennia, Europe’s diverse landscape, waterways, and climate have hosted great civilizations, empires, and a variety of peoples. Castle Reichenstein, in the Rhine Valley, dates to the early 11 th century. NEXT