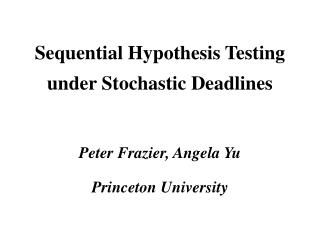 Testing and Debugging - . programming tools and environments. debugging and testing. testing: “running a program with

Stochastic algorithms - . outline. in this topic, we will cover: concepts about random numbers random number generators

Hypothesis Testing in the Real World - . thus far, hypothesis testing has been presented for situations in which the