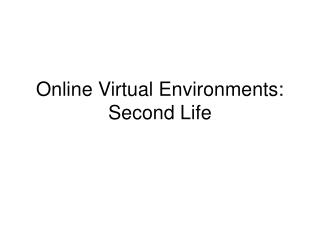 Second Life - . how does it stack up with educators in alaska?. my personal interest in the power of the visual. trna

Virtual Worlds - . definition: a genre of online community that often takes the form of a computer-based simulated

Virtual Worlds - . oct. 4, 2010. virtual worlds. what is a virtual world? where did they come from? who participates? Job Security in Teaching for Life: How to Become an Online Tutor - Have you ever had a fear of losing your