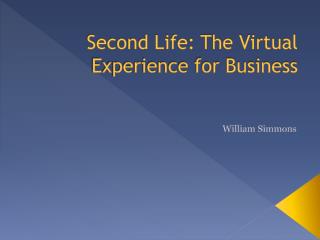 Second Life: The Virtual Experience for Business. William Simmons. What is “Second Life”. The term comes from an internet based virtual world started in 2003.(as seen on “The Office”) Users called “residents” interact through motional avatars. Introduction To The Security in a Virtual World - . presented by: carousel industries and juniper networks. agenda.

‘Choose a job you love and you will never have to work a day in your life’ - . overview. starting up: discuss ideas

So You Wanna Teach in Second Life? - . getting started using this massively multiplayer virtual world for education and

World of Warcraft - . an introduction. origins. released in 2004 by blizzard entertainment. the story and myths continue

Avatars vs. Real People - I n creating their avatars , people may make choices based on what kind of online world the

MBDA: The Company - . what is mbda?. created in 2001, mbda is an industry leader and a global player in the missile and