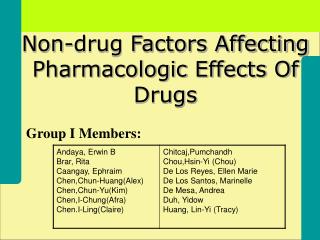 Non-drug Factors Affecting Pharmacologic Effects Of Drugs. Group I Members:. Purpose :. Basically, there are three types of drug. And each of them will let human produce different effects. The Stimulant Effect :. Non-pharmacologic Treatment of Depression - . . depression treatment. psychotherapyalone or as adjunctive

Factors Affecting Permeability Determination Non-Darcy Flow - . some figures in this section are from “fundamentals of