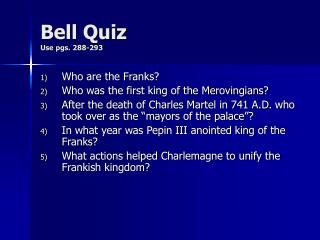 Bell Quiz Use pgs. 288-293. Who are the Franks? Who was the first king of the Merovingians? After the death of Charles Martel in 741 A.D. who took over as the “mayors of the palace”? In what year was Pepin III anointed king of the Franks?

Bell Work - . which of the following explanations do you think shows the best understanding of the quotation and why?.