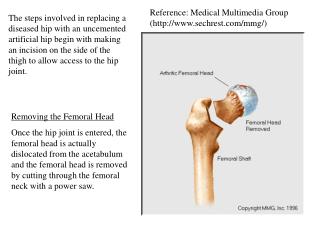 Reference: Medical Multimedia Group (http://www.sechrest.com/mmg/). The steps involved in replacing a diseased hip with an uncemented artificial hip begin with making an incision on the side of the thigh to allow access to the hip joint. Removing the Femoral Head Osteonecrosis of the Femoral Head - . matthew orton radiology presentation 7/20/2007. hpi. a 20 yo male with sle reports

femoral venipuncture - Procedure. place the patient in the supine position clean the skin around the venipuncture site

Femoral Triangle - . dr.bindhu.s. objectives. at the end of the class you will be able to define 1.femoral triangle 2.its

NATURAL HISTORY OF OSTEONECROSIS OF THE FEMORAL HEAD Prediction Based on MRI - . daniel j. berry, md professor and

Removing the Boxes - . john wager and allen salzman triton college. francis bacon’s studio, at the time of the

Removing the Blindfold - . an exploration of human difference . dedication . “this photobook is dedicated to all

Femoral Shaft Fractures - . muscle spasms can cause deformity of the limb significant amount of blood loss will occur.

What Is The Cost Of Removing Asbestos Removing ? - How much do you think a asbestos removing cost? gone through dozens of