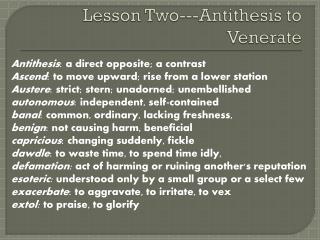 Logistics - . product lifecycle management. lesson overview in this lesson you will receive an overview of mysap product

B2 – Lesson 1 Keeping Healthy - . brainstorm how we get ill. how do we get ill?. infections - objectives and outcomes.

Power Practice for use with Vocabulary Power Plus for the New SAT - . book one 21 lessons 275 words. introduction to