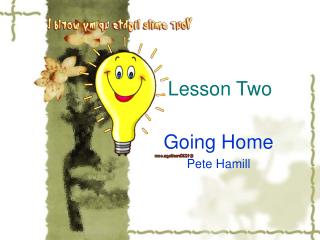 Lesson Two. Going Home Pete Hamill. Translation . East or west, home is best. There is no place like home. Home is home, be it ever so homely. All happy families resemble one another; each unhappy family is unhappy in its own way. —Leo Tolstoy . Lesson Two - . simplified equipment operation. introduction. getting the most out of equipment is important. it is easy

lesson two - . living on your own presentation slides. 04/09. the costs of moving. moving-in costs can include:

Lesson Two - . the cultural tip of the movie. forrest gump is a journey of an american man through four decades of

lesson two - . making money. the career planning process. whether you are seeking your first job, or considering changing

Lesson Two - . marrakech. aims . to know the writing technique of exposition. to learn the methods in developing an

Lesson Two - Marrakech aims to know the writing technique of exposition. to learn the methods in developing an

Lesson Two - . what do you like?. like &amp; dislike. i quite enjoy collecting stamps . i really admire cely dion . i

Lesson Two - . text a waiting for the police. faculty of humanities and social sciences department of foreign languages

lesson two - . making money presentation slides. 04/09. the career planning process. whether you are seeking your first

Lesson Two: - . observing properties. work with your partner to sort the solids into groups of different colors on your