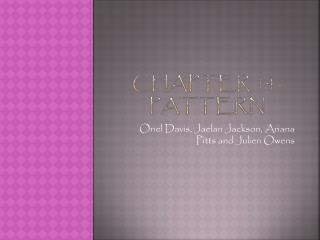 Chapter 14- pattern. Oriel Davis, Jaelan Jackson, Ariana Pitts and Julien Owens. What is a pattern?. Pattern is identified as searching after order and significance or a means of selection and arrangement.

What Is Frequent Pattern Analysis? - . frequent pattern : a pattern (a set of items, subsequences, substructures, etc.)

Chapter 15: The Chromosomal Basis of Inheritance - . essential knowledge. 3.a.4 – the inheritance pattern of many

The Dynastic Cycle - . 2/15/11 world history. what is the dynastic cycle?. in china, dynasties rise and fall in a pattern

Meal Patterns - Howard leikert march 1, 2010 meal patterns a great place to start nearly everything else a fsd does