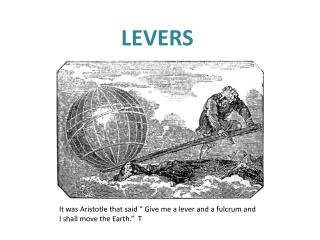 LEVERS. It was Aristotle that said “ Give me a lever and a fulcrum and I shall move the Earth.” T. ~ Archimedes. Introducing… The Lever. A lever includes a stiff structure (the lever) that rotates around a fixed point called the fulcrum. fulcrum. Parts of a lever.

Lecture 5 - . the knee. anatomy review knee joint particularly susceptible to injury because it is located between two

A machine is a device used to multiply forces or simply to change the direction of forces. - 9.8 machines. a machine is a

Chapter 11 Employing Strategy Implementation Levers - . 2. demonstrate how to use organizational structure as a strategy

THE CORKSCREW - . simple machines within a corkscrew. cog. cog. lever. lever. cog teeth. lever. screw. as the levers that

Levers - . bret chalpin, mccoy smith, and elaina donlon. levers. levers are one of the basic tools that were probably

Lever Systems - . classified systems of torque relative positions of force, resistance, and axis of rotation vary in the

Levers in Musculoskeletal System - . lever - simple machine consisting of a rigid, barlike body that can be made to