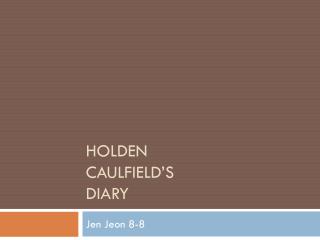 Holden Caulfield’s Diary. Jen Jeon 8-8. SATURDAY AFTERNOON. Early in the day, New york. “I was the goddamn manager of the fencing team. Very big deal.” I DON’T CARE about my responsibilities to both the fencing team and my school, Pencey Prep. . 3:00, Thomsen Hill. Ukiyo - ad - . some thoughts toward a theory of representation, social structuration and cultural values. todd joseph

The Ten Plagues of Egypt - . newsflashes!. what to do. you will be given one of the following characters. pharaoh moses

The Anatomy of Procurement Fraud - . by tom caulfield cfe/cig/cigi. fraud… fraud what is it?. criminal fraud?. fraud is

Diary of a Wimpy Kid - . how to write a diary. teaching flow. introduce the books. dear diary,. mom asked me to keep a