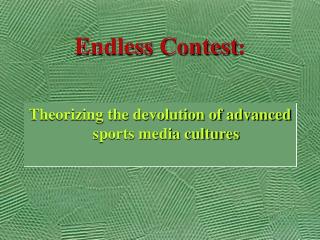 Endless Oceans - . or what goes around comes around?. the value of the oceans. they generate half of earth’s oxygen

The Contest - . the contest. short story

Investiture Contest - . this is the struggle for supremacy between the papacy and the secular rulers of europe.

Essay Contest - . who can write the best essay that draws on both science and social studies knowledge? who would like to

KORBEL Contest - . contest will run oct 1 st - oct 24 th the person who has the highest sales in eligible drinks, wins!

Contest Information - . this year we ask students to exercise their creative imaginations around the theme, &quot;if

Login contest - . submit your entries for the vepp login context in the box at the back of the room winners will be

Contest format - . 5 hours, around 8-12 problems one computer running (likely)linux, plus printer 3 people on one machine

Drinkware Contest - . grand prize!!!. how it works!. for every 10 souvenir glasses, you’ll receive one chance at the