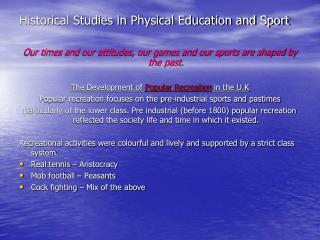 Historical Studies in Physical Education and Sport. Our times and our attitudes, our games and our sports are shaped by the past. The Development of Popular Recreation in the U.K Popular recreation focuses on the pre-industrial sports and pastimes

ADMINISTRATION IN PHYSICAL EDUCATION AND SPORT MANAGEMENT - . chapter 1 the nature of administration . case study 1: what

Teaching and Coaching Careers in Physical Education and Sport - . chapter 11. teaching and coaching careers. what are the