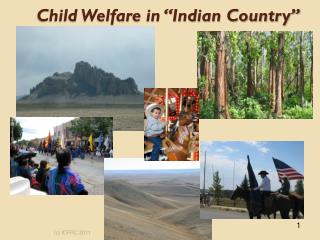 Child Welfare in “Indian Country”. 1. Presented by Kathy Deserly, Director Indian Child and Family Resource Center Helena, Montana April 13, 2011. 2. So what is “Indian Country?”. The Land. There are a number of types of "Indian country" recognized by US law: Eldercare in Indian Country - . shelly zylstra zylstra@dshs.wa.gov. overview. what? how are things different now? what

National Indian Child Welfare Association - . let us put our minds together and see what kind of life we can build for

What works in child welfare - . social worker contact the heart of the job. what works?. the relationship between the

Coaching in Child Welfare - . march 21, 2012. definition of coaching. a process by which one individual, the coach,