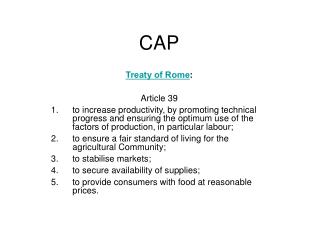 CAP. Treaty of Rome : Article 39 to increase productivity, by promoting technical progress and ensuring the optimum use of the factors of production, in particular labour; to ensure a fair standard of living for the agricultural Community; to stabilise markets;