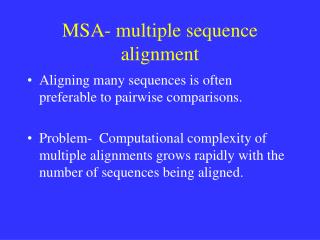 Multiple sequence alignment Why? - . it is the most important means to assess relatedness of a set of sequences gain

Multiple Sequence Alignment - . mult-seq-align allows to detect similarities which cannot be detected with

Multiple Sequence Alignment : NP - Hardness and How to Deal with It - . jens stoye bielefeld university, germany.