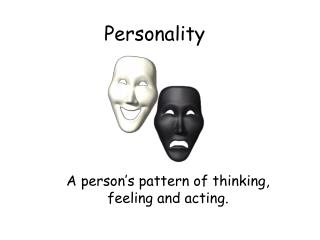 Personality. A person’s pattern of thinking, feeling and acting. Types of Personalities. Type A. Type B. Relaxed and easygoing. But some people fit in neither type. Feel time pressure. Easily angered. Competitive and ambitious. Work hard and play hard.

Personality - . trait perspective. the greeks. four humors that governed the body excess of either created a different

The Social-Cognitive Theory of Personality - . social-cognitive theory of personality: what is it?. proposed by albert

What is Personality? - . describe your own personality by generating a list of several key personality qualities you

Personality - . warm-up reflection write a brief “letter of recommendation” paragraph in which your teacher/counselor

Theories of Personality Seventh Edition - . by jess feist and gregory j. feist. © 2009 by the mcgraw-hill companies,