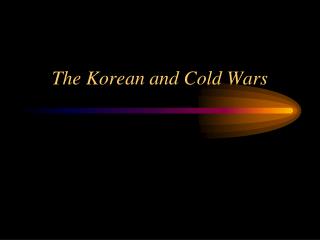 Cold War: Korean and Vietnam Wars - . korean war. american involvement in the korean war in the early 1950s reflected the

Korean and Vietnam Wars - . korean since the early 1900s, korea was a japanese colony after wwii, korea was divided at

Early Cold War and the Korean War from Pusan through Inchon - . lsn 19. cold war. a state of political tension and

The Role of Korean / Korean-American Scientists and Engineers - And their contribution to global society dr. jung uck

Truman and the Korean War - . truman: a fair deal. truman won the election of 1948 tried to pass his “fair deal” laws