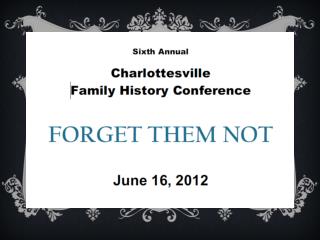 The Genesis of Genealogy The Genesis of Genealogy . “Why do they do what they do?” A historical narrative about The Church of Jesus Christ of Latter-Day Saints’ interest in Family History. The what informs, the why transforms. In the beginning . . .

The Genesis of Genealogy

Finding Ancestors using the Internet - . by jerry merritt. objectives. pass on a few simple tips and tricks to maximize

The Four Gospels - Life of christ. the four gospels. © john stevenson, 2011. matthew. the gospel of the king. the gospel

Exposition of Genesis 1-11 - . the genealogy from adam to noah gen 5:1-32. the overall structure of genesis. key word: