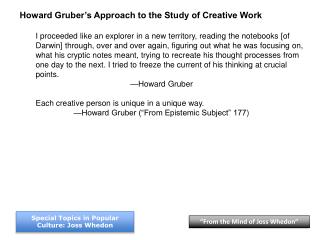 Howard Gruber’s Approach to the Study of Creative Work

La Haine – Un film macho? - . lesson objectives: in this lesson you will learn to analyse the macho and misogynistic

Buffy the Vampire Slayer: “Hush” - . background. aired from 1997-2003 written by joss whedon the town of sunnydale is

Film of the Sixties &amp; Seventies - . jennifer jones spring 2013. the sixties: the years that shaped a generation

Some topics in Consciousness studies - What’s in the mind that we may know it? cf shakespeare’s “ what’s in the

Film Topics: Ideology - . mr. skaar alhs film studies. the history of all human society, past and present, has been the