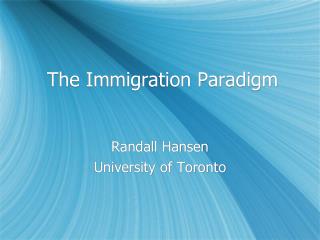 The Immigration Paradigm. Randall Hansen University of Toronto. Immigration is the issue of our time Each year we accept close to 1% of our population Some 40% of them arrive in Toronto. Questions. 1. Whether an overarching Canadian identity can (or should) be maintained.

Topics in the Globalisation Debate 1: Competitiveness; Immigration - . this lecture draws mostly from: krugman (1993)

Westward Migration, Industry, Immigration and Urbanization in American History, 1865 - 1920 - . after the civil war, many

Irish and German Immigration to the American Cities 1800 - . when?. the high point of the immigration was between

The History of Immigration in America - . objective: to understand early immigration in america by reading a selection of