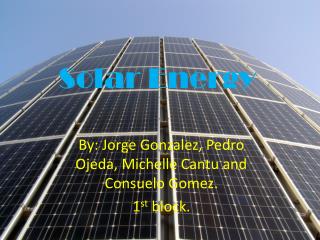 Solar Energy. By: Jorge Gonzalez, Pedro Ojeda, Michelle Cantu and Consuelo Gomez. 1 st block. Cost Per Kilowatts. For every kilowatt per hour the cost is .14¢. It takes 17 years to pay the total cost of the inversion for an average house that expends 920 kWh/month. Solar energy - . by: christopher r ogers . how is solar energy used to produce electricity. form of solar cell or panel

Solar Energy - . awesomely sunny: by ethan and kouju. what is solar energy?. do you know what solar energy is? solar