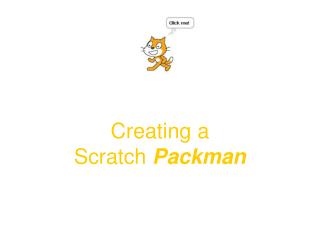 Creating a Scratch Packman. What you will learn:. To design a maze background To resize a sprite To move a sprite under keyboard control Stop the sprite moving over the background To get ‘prizes’ to disappear To score with the prizes To get the prize to appear again unexpectedly Kohlberg’s Theory of Moral Development Preconventional Level: Stage 1 Based on fear of punishment Actions judged by

Creating Accessible Documents - . it symposium 2011. course description. this is not training to using word and/or adobe

Ch 8 Creating the Constitution - . compromise – a settlement of a dispute by each party giving up some demands in order

Creating Communication Environments - . an overview. learner outcomes. understand the foundations of functional and