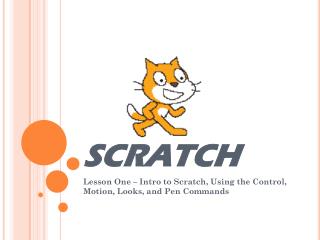 SCRATCH. Lesson One – Intro to Scratch, Using the Control, Motion, Looks, and Pen Commands. What is scratch?. Scratch is a programming language that makes it easy to create your own interactive stories, animations, games, music, and art -- and share your creations on the web.

An intro to programming concepts with Scratch - . session 1 of 10 sessions looks and motion. what are our course goals?.

Scratch - . origins. the beginning. on the first of the fifth two thousand scratch joseph clark was born at kenton

Scratch in the Classroom - . ellen sheerin. scratch familiarity. what is scratch ? i have looked at scratch, but not

Starting from Scratch - . starting from scratch. where did we come from? option 1: intellectual design. genesis 1:1, 27

Game-making!!! - . by shieks and jade!!!. about scratch. scratch is the program that you use to create your game this is

I.T - . in yr7 we studied all about scratch. also in this presentation it is going to show us all about how to use

Itchy Male Organ: 5 Tips for Hiding the Scratch - An itchy male organ can be enough to drive a man to distraction., but The process of developing a Chatbot from scratch. - A chatbot is an artificial intelligence system that you interact with

Scratch that Itch! - . an experiment in applying ideas from the mit media labs “scratch” application to create an