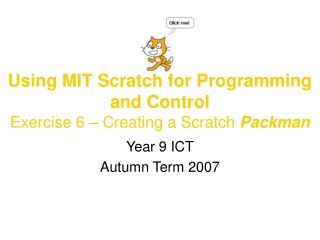 Using MIT Scratch for Programming and Control Exercise 6 – Creating a Scratch Packman. Year 9 ICT Autumn Term 2007. What you will learn:. To design a maze background To resize a sprite To move a sprite under keyboard control Stop the sprite moving over the background

Scratch for Interactivity - . activity – a game. we will make a game where the player controls a baby using the arrow

Using Scratch in the Science Classroom

Introduction to the Scratch Programming Environment - . what is scratch?. developed by the “life-long kindergarten”

Programming and Using ECLiPSe - . execution basics. execution can be regarded as a search through a tree-shaped