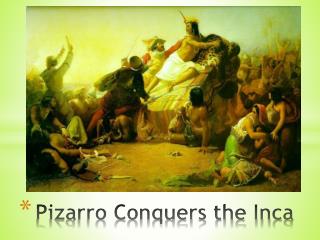 Bellwork: December 11 th Objective: Explain the significance of the Treaty of Tordesillas - . what is meant by the

PIZZARO - . by kai payne. pizarro’s early life. francisco pizarro was born around 1476 in trujillo, spain . he grew up

The Maya, Aztec, and Inca Civilization - The crowd goes wild when you and other players step onto the stone court. only

The Conquest of the Incas - . francisco pizarro. he was an illiterate, impoverished soldier, of who little is known.

Inca Empire - . teacher: rebecca johann. essential questions. what are some similarities/differences between the inca