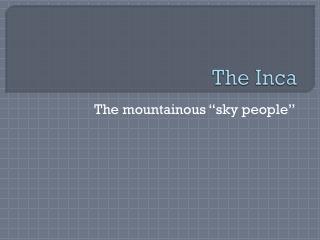 The Inca. The mountainous “sky people”. The Basics. As far as the Inca were concerned, theirs was the greatest of all the world's civilizations. They may have been right. Their empire was the largest of the ancient world; their golden capital, Cuzco, the richest city in the Americas.

Unit 1: Native America and the Age of Exploration - . tssbat *understand how the development of ideas impact exploration

Chapter 15 Conquests in the Americas - . objectives. analyze the results of the first encounters between the spanish and

APUSH Mid-Term Review - . chps. 1-15. the indian empire that dominated modern mexico at the time of the spanish conquest

Inca Social Structure - . inca development. the beginning of the inca rule started with the conquest of the chimu culture

The Conquista of the Aztec and Inca - . what the spanish found…. empires in trouble. the spanish appeared on american

Inca food - . (press f5 for slideshow). what they ate and why. meats. the incas ate meats rarely due to the lack of

Expansion of the Inca Empire - . adapting to life in the andes. at what elevation might this be? what would the weather