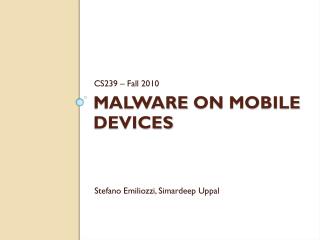 How Do I Install Norton Antivirus Mobile Security On My Android Device? - If you are facing any issues in your norton How to Install McAfee Mobile Security on My Android Device? - Mcafee mobile security is one of the best paid android

How to remove virus or Malware from your smartphone - Android and iphones are one of the toughest to be cracked up. there

Android Malware Characterisaion - . android under attack. android malware is on the rise in 2012 malware presence has

Smartphone Security - . how safe are you?. main points. malware/spyware other mischief how a phone might get infected