Women Can Do It Program - PowerPoint PPT Presentation 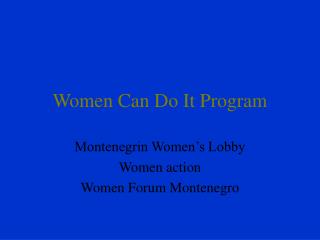 Women Can Do It Program Women Can Do It Program

Unit 6 Women, - . grasp the main idea (the belief in superwomen encourages average women to achieve their goal) and

The Position of Women in Czech Economy and Society : Past, Present, Future - . structure of the lecture. czech women at

Women in the Armed Forces - . 275,000 women volunteered for military service. women were used in all areas except combat.

Cardiovascular Disease in Women Module I: Epidemiology - . module i: epidemiology . statistics on women and