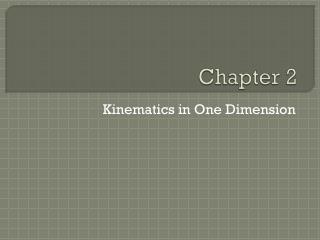 Chapter 2. Kinematics in One Dimension. Analyzing Motion. Displacement. The displacement of an object is a vector that points from an object initial position to its final position and has a magnitude that equals the shortest distance between the two positions. ∆ SI Unit: meter (m)