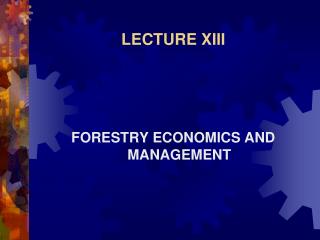 LECTURE XIII. FORESTRY ECONOMICS AND MANAGEMENT. Introduction. If forestry is to contribute its full share to a more abundant life for the world’s increasing populations, foresters must become familiar with the economic and political forces that determine much of our way of life.