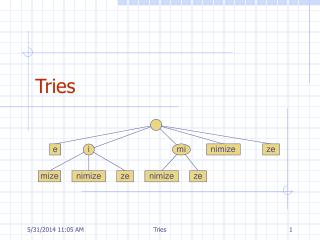 Tries - . a useful data structure of storing and retrieving strings and things.

Tries - . when searching for the name “smith” in a phone book, we first locate the group of names starting with

Tries - . trees of order &gt;= 2 variable length keys the decision on what path to follow is taken based on potion of

Tries - . definition. a trie is an index structure that is particulary useful when key values are of varying size. trie

Van Emde Boaz Tries (The presentation follows Willard’s fast tries) - . ram model. we have integers in the input each

Killy Tries His Best - . by tushar. hero. once upon a time, there was a hero named killy . he looked like a glowing