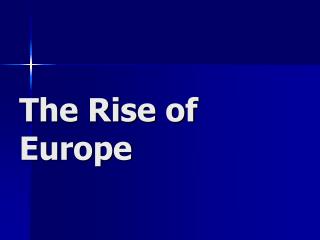 The Rise of Europe The Rise of Europe

Rise of New Leaders and Ideas in Europe during the 1930s - . who would you vote for?. contestant #1 i am a womanizer,

Feudalism in Europe - . the color is red. rise of feudalism. from 850 to 950 there were a series of invasions the muslims

The Rise of Nazism - . ss6h7 the student will explain conflict and change in europe to the 21 st century. a. describe

THE RISE OF FASCISM AND THE CAUSES OF WORLD WAR II EUROPE 1921-1939 - . fascism. fascism - impose state control over all

A Changing Europe – What Does it Mean for Petcoke? - . mccloskey’s petcoke conference july 20, 2004 by holger dewald

World War II Rise of Dictators in Europe - . ms. krall. road to war…. with the outcome of the treaty of versailles, new

The Rise of Totalitarianism in Europe prior to World War II - . “democracy is beautiful in theory; in practice it is a

Ch . 15 sec 3 Fascism Rises in Europe I. Fascism’s Rise in Italy A. Fascism - . fascism was a new, militant political

Rise of Feudalism - . feudalism is a decentralized organization. arises when central authority cannot, or will not

Rise of New Leaders and Ideas in Europe during the 1930s - . who would you vote for?. contestant #1 i am a womanizer,