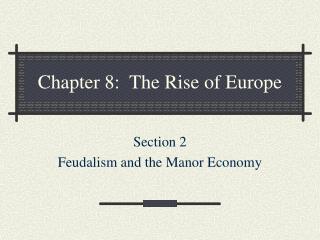 The Rise of Dictators - . chapter 17, section 1. how did stalin change the government and the economy of the soviet

THE RISE OF MEDIEVAL EUROPE - . backward period of time for europe. life for people existed mostly in their villages,

Between the Wars - . europe post wwi the great depression rise of totalitarianism stalin's russia rise of japan rise of

The Spread of Christianity and Rise of Eastern Europe - . chapter 9 (4 of 4). through missionaries, the byzantines spread

The Rise of Medieval Europe - . frankish rulers . by ad 500…. invasions by german tribes had destroyed much of the

Chapter 23 World War II ERUPTS - . the rise of dictators (23.1). the main idea the shattering effects of world war i

The Rise of Europe - . end of feudalism, the growth of trade and the commercial revolution. impact of the crusades.

Europe and the Rise of Totalitatianism - . the totalitarian challenge. the rise of modernism. dada and surrealist art.

THE RISE OF EUROPE - . chapter 7. the middle ages. times between ancient and modern 500-1500 medieval – culture during

EUROPE - . the european geography. geography that we care about. europe at a glance. end of french dominance german rise