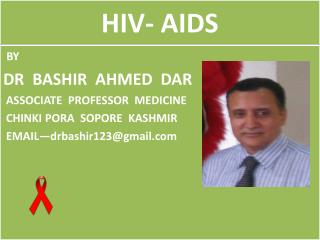 The most important way to stop HIV/AIDS is education. People can get HIV from sex and from blood. Children can also get HIV from their mothers (when they grow inside pregnant mothers and when they drink breast milk.) Sex is one way to get HIV. If people use condoms when they have sex, there is a much smaller chance of catching HIV.

Unrest in Kashmir - At least 65 people have been killed and 6,000 injured in more than 40 days of clashes between

Porphyria Made Easy By Prof Dr Bashir Ahmed Dar Sopore Kashmir - Doctors need to be aware of a rare, hard to diagnose

Infectious Diseases in Healthcare Focusing on HIV/ AIDS - . sm ii. objective. the purpose of this unit is to increase

HIV and AIDS - . what are hiv and aids? hiv is the human immunodeficiency virus. it is the virus that can lead to

The Other Sustainability Challenge : Revitalizing Reporting on HIV and AIDS - . reporting workshop. what is

20 Years of the HIV/AIDS Epidemic in the Caribbean: - A summary dr b.camara, medical epidemiologist, paho/who estimate

The psychic landscape of mothers-to-be: The role of attachment organization in pregnancy - . nata ša hanak faculty of