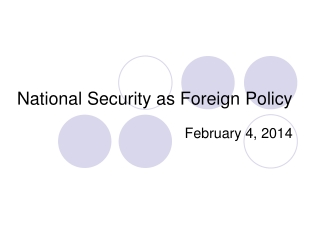 The Determinants of Canadian Foreign Policy - . an analysis of the factors that determine canada’s approach to foreign

Chapter 5 National Interest and Foreign Policy - . to what extent should we embrace nationalism?. how has foreign policy

Takings in National Security Emergencies - . what about regulatory takings, i.e., when someone cannot get paid or

A Look Back … The National Security Act of 1947 - . this landmark legislation reorganized &amp; modernized the …

Foreign Policy Instruments - . there are 4 fp instruments. diplomacy trade aid military power. what we are doing….

Foreign Policy - . test #7. what is foreign policy ?. stands and actions that a nation takes in regard to its

Export Controls: An Overview - . what are export controls?. us laws that regulate the distribution to foreign nationals