PLANTS, AND THE MOVE ONTO LAND - PowerPoint PPT Presentation 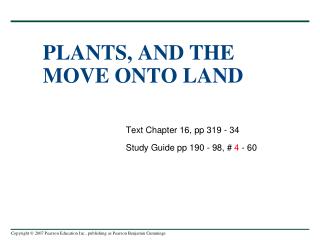 PLANTS, AND THE MOVE ONTO LAND

PLANTS, AND THE MOVE ONTO LAND

Lesson 47 Relationship between plants and animals - . all of the organisms in an ecosystem have interconnected

Vertebrates - . by: usama ahmad. what are vertebrates?. vertebrates are any animals that have a backbone. the five

Early Tetrapods and Modern Amphibians - . early tetrapods had to accommodate to the following differences when adapting

Land Plants – The Angiosperms - . www.onacd.ca. characteristics of angiosperms. are the most widespread land plants

Ecosystems - . chapter 30. ecosystem. an array of organisms and their physical environment, interconnected through a

Plant Diversity - . the evolution and classification of plants. warm-up: write each question and answer for each. what do Droplets of fresh water - 1. person holding a cold sheet of glass. look at this demonstration carefully and discuss what

Horticultural Responses to Water - . by c. kohn, waterford wi. how do they do it?. each day, huge sequoia trees transpire

Why do plants need sunlight? - . how do plants get what they need?. what reaction is this?. if plants use oxygen, why do

VERTEBRATES AND INVERTEBRATES - . all animal can be classified as belonging to one of two groups: those with backbones

Plants - . plants are autotrophs: they get their energy from sunlight, and they synthesize their food from carbon

Human Impacts on the Colorado Life Zones - . vocabulary. consequence . - the result or effect of an action. 2) ecology. -