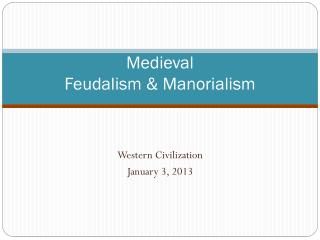 Medieval Feudalism & Manorialism. Western Civilization January 3, 2013. What is Feudalism?. Military and political system based on land ownership and mutual obligations (i.e., you get land for promising stuff). What led to feudalism?. The collapse of the Roman Empire

Japanese Feudalism - . lord or vassal?. what is feudalism?. a political, economic, social system in medieval japan and

FEUDALISM - . feudalism is a vague term invented by modern historians to describe a complicated pattern of social,

Chapter 13 Section 2 - . feudalism and the manorial system. feudalism. 900s: most of europe was governed by local lords

Feudalism - . by lucas nicholas and emile boyd period 8. what was feudalism?. feudalism was a system of contractual

Feudalism - . the economic, political, and social system in medieval europe, in which land, worked by serfs who were

European Medieval Feudalism - What were the relationships that existed in the european feudal system?. feudalism:.

Medieval Times - . feudalism :. feudalism was a set of legal and military customs in medieval europe that flourished

Feudalism - . feudalism. invaders posed a threat to the safety of the people due to decentralized government people

Manorialism - . emma mcgirl , lily gold-parker. the manor: an economic system. the manor was the lord’s estate one or

MEDIEVAL EUROPE REVIEW - . what was the political system in medieval europe that was based on the bond of loyalty between

The Medieval Manor - . the economy of the middle ages. manorialism. everything that the group needs is produced on the