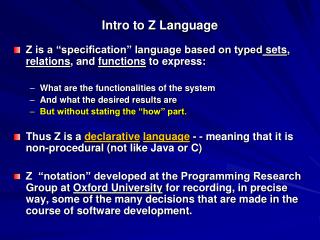 Intro to Z Language. Z is a “specification” language based on typed sets , relations , and functions to express: What are the functionalities of the system And what the desired results are But without stating the “how” part. Language - . what is language ? how is language related to thought? how is written language different from spoken

The Origins of Language - Engl 160: intro to language. the origins of language. overview. where did language come from?

Language Analysis - . to understand what we expect in a language analysis essay and to practise this. from the study

Persuasion intro - . purpose. first and foremost- remember you are trying to prove yourself right. they are wrong. you

Intro to HTML - . intro to html. hypertext markup language (html) is a way of telling web browsers how to display a page

Intro to Python - . python is an interpreted language can be used interactively identifiers are case-sensitive operators

Intro 1 - . corresponding text is on page 786 of your textbook. intro 2. what kind of movie do you think the people in

10 minutes overview to z-tree - . outline of presentation. what is z-tree? what can it do? how does it work? when to use?

An Introduction to Z-Tree - . in a computerized experiment, an experimentor and a number of subjects need to communicate