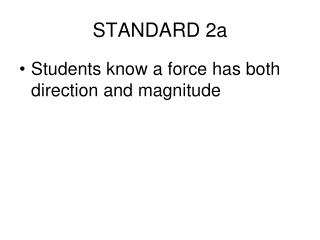 STANDARD 2a. Students know a force has both direction and magnitude. FORCES. A force is a push or a pull Force is a vector with a magnitude (strength) and a direction in which it is exerted Arrows are used to represent force SI unit for the magnitude of a force is the newton (N) The Target Standard 2a - . the government’s responsibility is to protect americans rights. did you

#2A - Reflexive verbs – a verb in which the person does the action for/to himself. these verbs use “se” at the end

Lecture 2a - . triphenylphosphine. introduction i. phosphines are frequently used as ligands in metalorganic and

Lecture 2a - . determination of the concentration and the acid dissociation constants of an unknown amino acid (part ii).