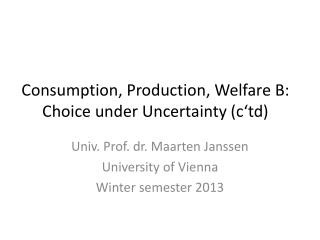 Agricultural Animal Welfare - Does agriculture improve the welfare of animals…? …or cause unnecessary suffering?

The Poultry Industry - . one of the fastest growing segments of the animal industry. consumption. worldwide consumption

Modeling of Uncertainty in Computational Mechanics - . andrzej pownuk, the university of texas at el paso

“Blessed are the flexible, for they will never be bent out of shape” - Managing operational flexibility under demand

Founding Principles of the Welfare State - . to what extent have they been met?. want disease ignorance squalor idleness.