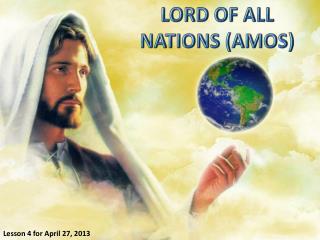 LORD OF ALL NATIONS (AMOS). Lesson 4 for April 27, 2013. HISTORICAL CONTEXT. AMOS. Amos (“burdened”) was born in the kingdom of Judah. His job was to shepherd oxen and to pick wild figs (Amos 7:14) So he was a man with little economic resources and education. Seek the Lord, and Live - . amos 5:4-15. sins of the people of israel. idolatry cruelty to their fellowman idleness and

A Choir of All Nations - . our multicultural background. peace. peace. joy. love. in this choir. we are pursuing …. the

All nations apostolic tabernacle - . the ministry of restoration. romans

THE BOOK OF AMOS Part Two The Lord is His Name - . “seek me and live; but do not seek bethel, … bethel shall come to

“Amos In A Mess” A sermon series on the book of Amos - . today’s message the source and voice of authority