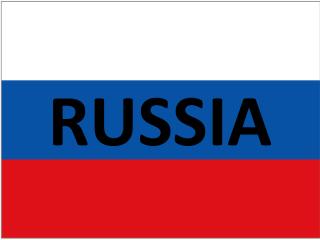 RUSSIA. T he capital of Russia is…. MOSCOW. Russia is the largest country the world . Located in the northern and middle latitudes a of the Northern Hemisphere, most of Russia is much closer to the North Pole than to the equator. Russia - . ss6g10 the student will explain the impact of location, climate, natural resources, and population

Russia - . russian culture. they are very emotional there are lots of smokers problems are usually toughened out or

Russia - . can you name the russian/soviet leaders of the 20 th century?. *information in this presentation adapted from

Russia - Sswg6 d. describe the various ethnic and religious groups in the region and the effect of geography on those

RUSSIA - . regions of russia. general information. land area-russia is the largest in the world. russia is twice as large