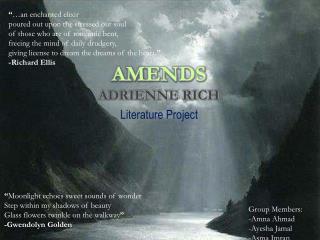 “ …an enchanted elixir  poured out upon the stressed out soul  of those who are of romantic bent, freeing the mind of daily drudgery, giving license to dream the dreams of the heart .” -Richard Ellis. Amends Adrienne Rich. Literature Project. “ Moonlight echoes sweet sounds of wonder

What is Development? What does it mean to be rich and how do you get rich? - . jared diamond’s (yalu’s) question.

Power by Adrienne Rich - . josue ugalde 2/16/14. title . the use of a single word as the poems title only empowers the

Rich Soil! - . the soil in the area contains lots of nutrients. add one tiddlywink. attack of the killer bugs!. a

Chapter 9 - . development. rich and poor. the world is divided between relatively rich and relatively poor countries.

The Physical Properties Of Minerals - . wjec as geology i.g.kenyon. colour 1. 8cm. determined by the chemical composition